Yoga in the Himalayas Enroll NowContact Us
Home » Nepal
Salamba Yoga’s courses in Nepal are conducted in the beautiful city of Pokhara. Pokhara is situated 200 km west of Kathmandu and is considered as the tourist capital of Nepal. The word “Pokhara” is derived from “Pokhri” which means “a water body”. As many as 7 different water bodies are present in this region giving it the name “city of the lakes”. It used to be an important resting point on the trade route between India and China and one can still see the imprints of the old trade route along the mountains.

Pokhara has an elevation of 827 meters and has a very moderate temperature throughout the year. Rain season falls from May to September, with July seeing the maximum rainfall.
Three of the ten highest peaks in the world including the famous Annapurna can be seen from Pokhara and trekkers from across the globe consider they city as a must visit destination to climb up the beautiful Himalayas.

The scenic beauty of Pokhara makes it one of the most beautiful places to do yoga in Nepal.SalambaYoga is situated at a distance of a 5 mins walk from the Fewa Lake which is the heart and soul of this beautiful city. Rich diversity in flora and fauna around the lake provides a good opportunity to soak oneself in meditation and rejuvenate.

In addition to yoga, meditation and pranayama, Salamba Yoga loves taking students out for excursions, to tap into your adventurous side. Salamba Yoga’s excursions include visits to the following places:

Pokhara is surrounded by many Temples and Gumbas which serve as a combined space for the Hindus and Buddhists population of the city to pray. Some of the notable tourist attractions are:

Located at a distance of 6 km from our yoga school, Shanti Stupa is a tall dome shaped structure on top of Anandu hill. It was constructed in 1973 and serves as a perfect spot to meditate. Spectacular views of Dhaulagiri Ranges can be seen from the Stupa overlooking the Fewa Lake. Hiking trails and cycling tracks are the ways through which one can visit the Shanti Stupa. Crossing Fewa Lake by boat and then hiking up the trail to Shanti Stupa through the woods is a profound experience. We conduct outdoor yoga at Shanti Stupa during our yoga programs in Nepal. 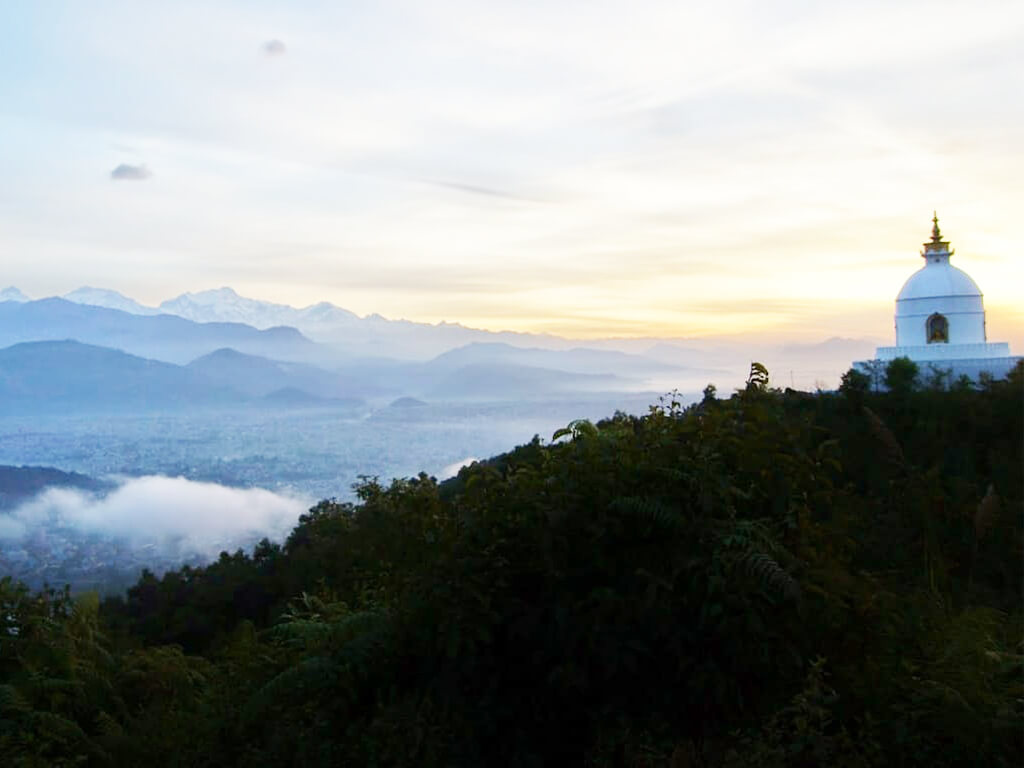 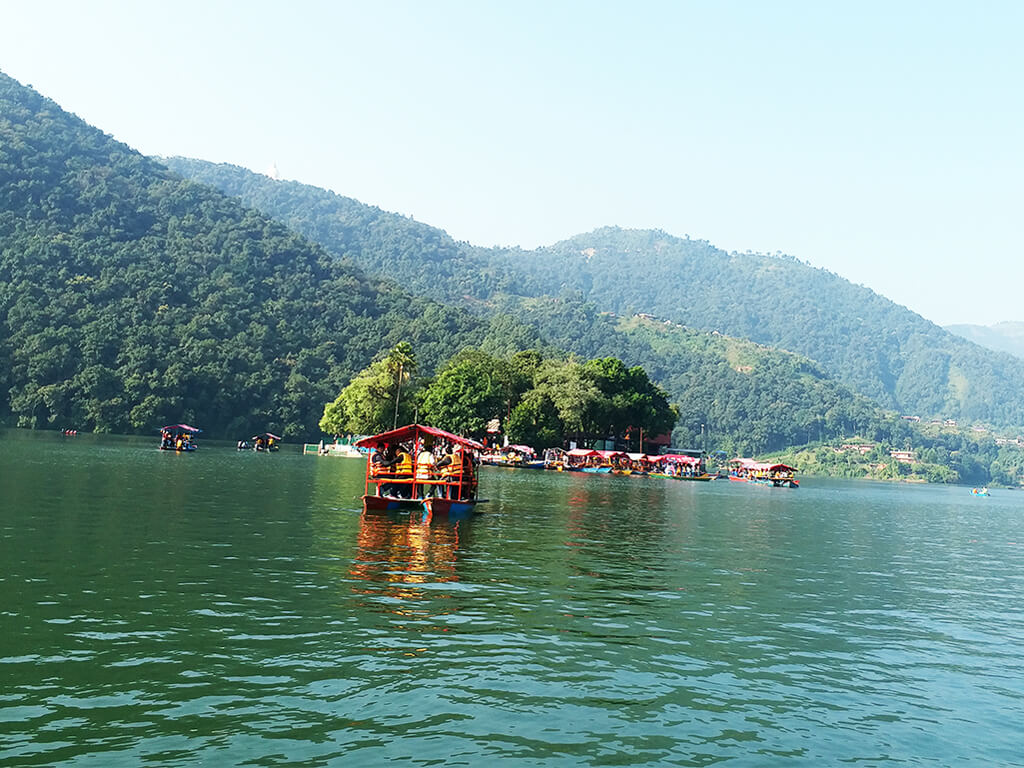 Tal Barahi Temple is a Hindu temple dedicated to the Goddess Barahi (protector of the gods) is situated in a small island close to the south eastern part of the famous Fewa Lake. A boat ride of 10 minutes will take you to the temple. The sight of women dressed in colorful saris worshipping the goddess is an experience in itself. According to one of the customs, people bring pigeons to the temple and set them free to get blessings of the mother Barahi. Fragrance of the incense and clear view of snowcapped mountains from the temple makes one connect with the inner self almost instantaneously.

MatepaniGumba is a Tibetan Buddhist monastery established in 1960. It is situated on a hilltop located at a distance of 7 km from our yoga school in Pokhara. Colorful Tibetan paintings of different enlightened masters welcome you to this huge structure. Smiles of little Tibetan monks make you feel at home as you watch the Tibetan rituals take place. The sound of Tibetan chants in front of the 11 ft tall Buddha statue makes you sit in awe and soliloquy.The tall and mighty fishtail peak also known as Machapuchare can be seen clearly from the monastery. 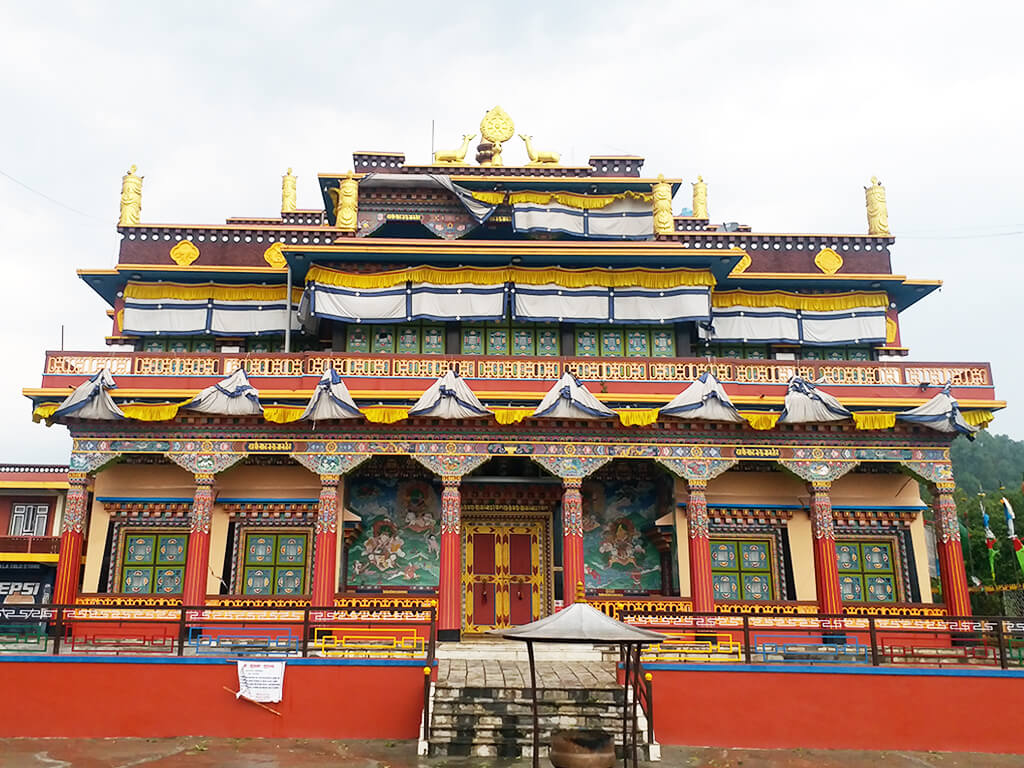 Fewa Lake is the second largest lake in Nepal,located towards the south of Pokhara. The sight of reflection of the mighty snowcapped mountain peaks amidst the calm and sparkling and waters of FewaLake makes it one of the most visited spots in Pokhara.SalambaYoga is located at a walkable distance of 5 mins from the lake. We conduct outdoor yoga near the lake during our yoga teacher training courses in Nepal.

Begnas Lake is the third largest lake in the south-east side of Pokhara city. This is another favorite tourist spot that provides clear views of Annapurna and MansaluRanges. It is situated at a distance of approx. 15 km from our yoga studio in Nepal. One of the excursions offered by us takes our students to this clear water lake.

Classical yoga asanas are taught based on awareness of the source of the movement. Special focus is placed on anatomy and movement, making our YTTC very unique compared to other courses offered in Nepal.

Classical Yoga and its Interpretations

Salamba Yoga pays a lot of emphasis on delivering classical yogic interpretations through its curriculum. Authenticity in teaching is our priority.

Our YTTC is highly structured and engaging. Over 7 hours of yoga and discussions of anatomy, philosophy and art of teaching every day makes our program very applied and informative.

Our premises in Pokhara include a fully equipped yoga studio, beautiful lodge with cozy rooms, lawn with trees and garden. The snowcapped Himalayas are easily seen from our yoga hall and the sun soaked terrace provides a beautiful space to sit and sip your morning coffee.We provide 24/7 WIFI access to allow you to stay connected with your family and friends back home.

Salamba yoga provides best yoga teacher training experience in Nepal and strives to maintain the best possible standards to make sure a comfortable and pleasant stay in Nepal for the yoga students.

Round the clock bus and jeep services are available from Kathmandu to Pokhara.

Green line (VVIP) bus service and tourist bus (standard busses) services operate from Thamel area every day. Price varies from NPR 700 to NPR 2800. Average journey is from 7 – 8 hours. Pre booking the ticket is a good option. We suggest booking a green line bus which is expensive however is safe and comfortable. You will be provided free pick up from the Pokhara bus station to salamba yoga in Nepal.

Our location in Pokhara Nepal